Welcome from about me Page . I may not be better than other people, the matter you read all happened before 18th Years. now what happened to me after 18 Year that’s what I am mentioning here . Well we all believe from 18 our Golden Age Starts. I scored 73% from from Higher Secondary and Planned to Pursue my College life in Tamil Nadu. I have my own way for academic studies. the way I Planned was : Degree from Tamil Nadu and Post Graduate from Bangalore. So I told my wish to my parents but the first answer was BIG NO but I wasn’t decide to drop my plan. at last they agreed . but Dad told me to do graduation from Bangalore ! it was good decision & made break through in my Life.

then next step was to search Colleges in Bangalore  Dad gave some of his friend’s son number. me and my Cousin Jareer T.P went to Bangalore to search college directly. from there  I met a good friend named Ashiq Pookottur who gave support and Guidance later . now he’s running his own Travel Agency Company at Saudi Arabia. the great advantage of him was he remember all the date of events not only Important one. If I ask him when I reached at bangalore he can still memorize  it. he connect these dates with important dates.  great memory. 🙂

the College I first visited was Brindavan College and liked at first sight. the benefit of that College is that We can  with different nationality.  that would be a great experience. I joined there. Honestly I have to say that my first year Life in that College was not good. Only one College Club named ‘Culcurio Club’. I was Event Manager in that club for two years , no department Clubs and the lecturers were not that much good. but from Second year all things Changed. 2 energetic lectures Joined in Commerce Department  named Syed Kazim and Mahamood Yunis. they started Echelon club, later changed it as ‘The Firm‘ by the request of College.

‘The Firm’ came up with Product Launch Competition, its completely a Presentation. they were around 10 Participants.  I presented about ‘Virtual Reality Machine’. the Concept was like by entering in a machine we can go to any Place in the world with the help of many satellite 4D video & also satellite sensor capture the smell of the Place and eject same kind of smell in Virtual Machine stored in it. the shape of Reality Machine is like enter in a cabin &  wear metal dress  with Screen helmet , when we move, wheels  below  cabin rotate and give a feel of walking through  helmet screen . after the Presentation every Presenter get questions from Judges and auditions. I didn’t get any prize for it but I always believing taking part in competition is more important than Prize. by the way crazy Machine idea right. whatever …

After Product launch competition ‘The Firm‘ came with Next, I was waiting for it. and many students involved. ‘Business Plan’ competition , 3 Weeks Practical Competition. Club Provide us र 1000 (INR) and with this we have to start a Business in real. Many Students  submitted their Business Plan. after screening 18 students selected for the real war. Many Students came with different ideas. the Selected Product which I remember uniQx (a modified Version of Linux OS) | Greeting Cards designed by Students | Dresses | Provisional Store Products with  discount etc etc. 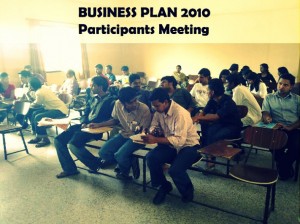 I  looked for Low Investment Business and started Lottery Coupon for र 5 [INR].   the reason was everyone ready to spend 5 INR and we can sell many Coupons . I give more Priority to Customer Satisfaction. You might heared this Proverb ‘Little Drops of Water Make the Mighty Ocean’.  I was in that Line.  the first Price of it was a Fast Track sun Glass cost around 999 INR but I bought it for 50% off, Second price 2 Liter Cool Drinks and 10 other Bumper Prize just to attract students.

Well; the winner criteria wasn’t only Profit. all weeks we have to focus differ things to avoid elimination. 1st week was Profit week, 2nd Advertisement week and 3rd Social Awareness Campaign. as Per the Business Plan announcement  we have to find a business Partner so Mercy Hepzibath I choosed and in Social Awareness (3rd week) week added Sruthi S Pillai. because girls are best for College marketing. Each week elimination were happening as per Point level. Finally we reached in final list. Last assigned work was to do Presentation of Our Business activities. We reached at 6th Position after considering all Points. Business Profit was also a Major factor.

In that year only (2010) ‘The Firm’ announced another competitions we took part in Marketing Event (2 days) this time my Partner was Nihad Moidheen. We got 3rd Prize in it . lots of activities happened in these two days like :

2010 Dec College Club named ‘Culcurio Club’ organized Food Fest. as I mentioned before students from different countries studying there. So this would be a nice time to taste different culture. got in charge of  my state Kerala. when Club conducted this program 2 years back  We heard Kerala stall food got wasted because seniors fixed high price. So we all decided to give Priority to enjoy our taste for other nationalities and charged average price. it was a big success. Kerala stall reached in 2nd position in profit. First was Srilanka.  we really enjoyed this fest. 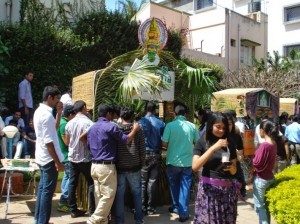 It was a completely group effort, Prepared food by our self, everyone did what they can do, when others Prepared food Ingredient these two made us tasty  Chicken Fry, Fish Fry, Beef Fry and its Gravies. thanks to Sreejith Moorthattil and Mansoor,

You can see in Food Fest Gallery, a food item called ‘Almajudi Avil Milk‘ , many Arabs came and asked was that a Kerala item because of the name ‘Almajudi’ feels a Arabic word. honestly that real name of that item is Avil Milk [ Pressed rice with Milk] is one of the most popular drink sold in Malabar with Milk, Pressed Rice and Almond. It was Ismayil’s idea behind this name added ‘Almajudi’ , we dont know what it means (If anyone know, Let us know), to attract the customer we added it. 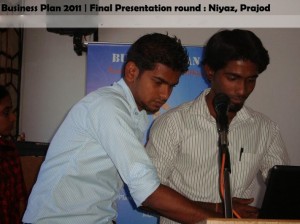 I dont wanna miss any competitions, so I took part In Business Plan again . all rules are same as last year but this time Lottery Business is prohibited in Business Plan. I Choosed partner as Harish Krishnan and we started Game Show for less Price (र 10). the Game Winner get Bangalore Saloon Coupon Off  & Bumper Prize as Nokia 105 Phone worth र 1200. 2nd week of competition we added Prajod Gopalakrishnan and 3rd Week Dulanjali. later we expanded our business to water melon & Pineapple juice with the help of a Juice maker. In a day we sold nearly 50 glasses each.

to avoid Elimination  In all week we have to focus in different things as Club Suggest,  In first week  If it’s Profit, Next  Week Customer Satisfaction, another week Corporate Social Responsibility (CSR).    after weekly elimination 13 teams out, this time also 6th Position . Consistent Player. 😀

after some month this Club introduced management fest named ‘Velocity’. College Fest & this was together. So we did Mime Practice as well as took part in HR event. Me & Nihad Moidheen partners. I told him to choose Marketing Event but he said lets try something different. Yeah Alright. We went through different task but we were totally unfamiliar with Collage task & failed in this. Eliminated. boom 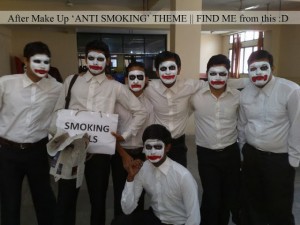 When I joined in the College Keralites not taking part in any event, it made me sad, I dont know Dance or Signing  but we have to do something in college Youth Festival. So 2009 Freshers day we couldn’t do anything. but 2010 things has change. with the help of  Safwan & Shamsheer we did a Art form called miming in Brindavan College at first time. the Topic was ‘ ANTI SMOKING’. it got big appreciation from  Students & one first prize under the competition item Skit. this Program selected for Karnataka state youth Festival [2011] later.

Next year we Performed miming ‘AGAINST CORRUPTION ‘ for Fresher Day 2011 & wasn’t a competition item ,  Story of mime was :  There was a Farmer, he was happily living and one day a land mafia came to capture his field. He destroyed his corps, farmer tried to stop them but was so weak and not unable to stop them. After that he went to police station with his wife to give complaint,

Police man was corrupted Person and he was not accept the complaint without bribe. The farmer had no other option and he gave whatever money he had. Police man came to field & he was about to arrest land mafia. But land mafia has great hold in the politics and they made the Politician to call policeman , Police man got terrified and he went away from field.

Farmer decided to speak with Politician for help and they went to his place, he also asked for bribe. they didnt have any money left. no other option he gave the only gold chain of his wife, Politician made mockery on them & threw the chain on farmers face. then the farmer understood that Police and land mafia are allies [friends]. With the help of Politician land Mafia arrest Poor farmer and murdered him in Jail and made it as a suicide.

took Part in different competition and enjoyed Life with friends. previous years college graduation held in Leela Palace Bangalore but our Graduation day in our own College but we were not sad because of the Guest. it was   Dr. A P J Abdul Kalam [Former President of India, Scientist ], that not the reason of happiness, he is Youth Inspiration and very humble man. he only told to college chairman that he wouldn’t come If it happening in Hotel, he wanna see the students from their college only. what a man. to listen his inspiration speeches Please click here